Museum of the Moon arrives at St Peter’s Church! 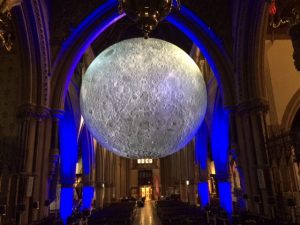 Museum of the Moon Times

Museum of the Moon is a touring artwork by UK artist Luke Jerram. It was inspired by living in Bristol and noticing the huge tidal variation as Luke cycled over the Avon Cut each day. His moon research also led to his artwork Tide.

Measuring seven metres in diameter, the moon features 120dpi detailed NASA imagery of the lunar surface. At an approximate scale of 1:500,000, each centimetre of the internally lit spherical sculpture represents 5km of the moon’s surface.

Over its lifetime, the Museum of the Moon will be presented in a number of different ways both indoors and outdoors, so altering the experience and interpretation of the artwork. As it travels from place to place, it will gather new musical compositions and an ongoing collection of personal responses, stories and mythologies, as well as highlighting the latest moon science.

The moon has always inspired humanity, acting as a ‘cultural mirror’ to society, reflecting the ideas and beliefs of all people around the world. Over the centuries, the moon has been interpreted as a god and as a planet. It has been used as a timekeeper, calendar and been a source of light to aid night time navigation.

Throughout history the moon has inspired artists, poets, scientists, writers and musicians the world over. The ethereal blue light cast by a full moon, the delicate crescent following the setting sun, or the mysterious dark side of the moon has evoked passion and exploration. Different cultures around the world have their own historical, cultural, scientific and religious relationships to the moon. And yet somehow, despite these differences, the moon connects us all.

Museum of the Moon allows us to observe and contemplate cultural similarities and differences around the world and consider the latest moon science. Depending on where the artwork is presented, its meaning and interpretation will shift.