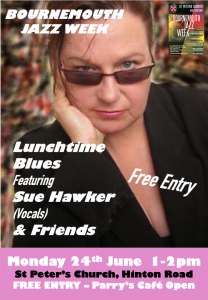 Vocalist Sue Hawker is probably best known for a series of albums she made with guitarist Rob Koral. The album ‘Favourite Sin’ represents her latest song-writing partnership with pianist Guy Gardner. On this album, Sue concentrated on a set of songs which – in her words – “either drive us forward or mad” e.g. the neighbour who outstays his welcome or the excitement of an illicit romance. For her band, Sue has chosen some of the UK’s most widely respected musicians – including the master drummer for any situation – Mark Fletcher – and there is a welcome guest in the form of guitarist Rob Koral.

Guitarist Rob Koraland jazz vocalist Sue Hawker have often been described as the UK’s answer to Tuck & Patti. They have been performing together for many years and have played major venues including Ronnie Scott’s, The Royal Festival Hall, Barbican, Vortex, 606 Club and Glasgow, Edinburgh and Birmingham International Jazz Festivals. They have broadcast on the BBC and appeared on ITV’s the James Whale Show. They have also toured Australia and the Far East.

Highly respected by other singers, her lyrics have been recorded by many other artists and her reputation as a writer has sometimes overshadowed her unique vocal style. Her blues-tinged voice is well loved on the club scene and not many jazz based singers enjoy such a heavy schedule of gigs and concerts around the UK.