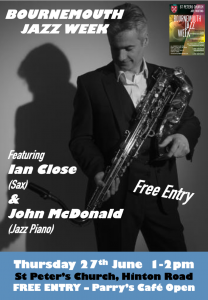 Ian has been a  professional saxophonist based in the UK for twenty five years and has performed in many countries and in many different musical situations.

As a teenager in the U.K., he grew up listening to his cousins Motown and soul records. He was transported by the energy and passion that they possessed and indeed, still gets ‘goose bumps’ when he listens to the musicians on those records.

As an emerging saxophonist, unlike his peers who played jazz, Ian was in bars and nightclubs playing covers of artists such as Teddy Pendergrass, Wilson Picket and the Average White Band.

He has been lucky enough as a professional saxophonist to tour with many great artists but a highlight for him was touring with Hamish Stuart from the Average White Band and getting to play their hit ‘pick up the pieces’ with him …a saxophone classic! It was an odd moment, as he remembered being twelve years old and laying on his parents living room floor, listening with headphones on to that record thinking to himself, ‘I wish I could do that’.

Partnering with John McDonald on the jazz piano, this lunchtime get lost in days gone by…