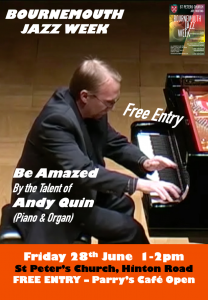 Andy Quin was born in London and began playing piano at 4 years of age and organ at 8. Having been a childhood fan of Sidney Torch, Andy began his organ playing career on the famous Christie at the Regal, Edmonton and was also mentored by Joseph Seal. Moving from London to the East Coast he then joined the Colchester Hammond Organ Society where he had the opportunity both to listen to and play alongside many of the greats of the organ world including George Blackmore, Brian Sharp, EnaBagaand Jerry Allen to name but a few. In 1971, Andy attended the Royal Albert Hall organ centenary concert and was much inspired by the improvisation of the great classical organist, Marcel Dupre. The following year he played in a concert on the Astra Llandudno Christie with Robinson Cleaver, where he made his first radio broadcast, and afterwards was offered a short spell of accompanying silent movie screenings on the theatre organ.

Having played many cinema organs and given numerous concerts in the southeast and London as a child and teenager (including the ILOMS Christie, DissWurlitzer and the GaumontState Kilburn where he performed alongside Robin Richmond), Andy’s focus moved more towards composing than performing. He was also becoming very interested in electronics and recording, (he turned his dad’s front room into an electronic music studio with synthesizers, tape loops, an array of speakers and the linking together of two organs to make a 4-manual console!). He turned down a scholarship to the RCM and went on to study for a degree in Music and Electronics at KeeleUniversity. Andy continued his studies on classical organ as well as performing summer seasons in various hotels, clubs, pubs and holiday parks to earn money when he was a schoolboy and student. This included many seasons at the Seawick Holiday Lido Clacton, where he had the opportunity to accompany famous visiting pop acts such as the Three Degrees.

After graduating he started composing music for TV and Film and his internationally successful career as a composer really took off in 1984. Since then Andy has had very little time to pursue his first love of performing although he has always kept a keen interest in organs. He has composed numerous TV and film tracks using both electronics and pipes as well as being broadcast on The Organist Entertains.

Andy is much in demand around the world for his compositional work, particularly in the US. Recently his music has featured on major productions such as Boardwalk Empire, Ab Fab The Movie, Victoria & Abdul, Widows, The Assassination of Gianni Versace and Supernatural, also worldwide ad campaigns such as Nike, Barbie and Mon Guerlain. His trailer to the Terrence Mallick film ‘To The Wonder’ was a finalist in the Music and Sound Awards 2014 at The Troxy. He has composed and recorded over 80 albums for his publisher De Wolfe Music. He is also an enthusiastic educator and supporter of pipe organ restoration projects. He gives illustrated lectures/workshops/demonstrations to schools and Universities on aspects of film and TV music including cinema organ and music for silent film whenever time permits.